My eyes still bleary despite a shower and the coffee I was nursing between snips, I zeroed in on the kitchen shear blades as I sliced strawberries for the Twins’ breakfast. A momentary lapse in concentration could end in a crimson sprinkle even harder to clean off our idiotically-stark-white kitchen counters than the strawberries themselves. (No, we did not choose this color scheme, nor do we own this house, so until this fine publication makes me a kajillionaire, we keep plenty of Magic Erasers on hand.)

We’ve just discovered this scissor method, as opposed to the standard knife approach. When you have to cut up food for two one-year-old mouths as often as we do, you’re willing to try just about anything to avoid the monotony of hacking at a plate-full of adult-sized food for what feels like half an hour. Initially, my wife raved about the new method, claiming, “This is awesome! I don’t hate it that much!”

Sadly, the novelty has worn off, and shearing food is now just about as fun as knifing it, but with the added thrill of increased-finger-loss likelihood. Still, I wasn’t feeling very knifey on this particular morning, so I went with the novel annoyance rather than the mounting one.

The Twins, who had just guzzled their morning milk, were in a fantastic mood, combing the playroom for toys now exciting again after a long night’s sleep. I glanced in from the kitchen every few slices to find them gleefully tossing plush and plastic into the air as if they were in swimming in Scrooge McDuck’s Money Bin.

I soon heard the familiar clang of an allegedly-“spillproof”-but-actually-very-spillable snack cup across the bars of the baby gate. It was my son, doing that thing that people in prisons do with their mugs against the bars that I don’t think there’s a word for. “Muh,” my son asserted.

I couldn’t help but laugh. My son had recently picked up on the word “more” while eating, discovering its magical qualities of affording him additional food whenever he so desires. It’s been incredible seeing him use it. While the Twins’ vocabularies are full of identifying nouns (Dada, ball, duck, etc.), this word is different–one that, to me, signifies “muh” direct communication. Instead of just pointing and naming things, he can actually tell us if he’s still hungry, which is infinitely more effective than sitting more food on his tray and waiting to see if he flings it back in our faces.

“Sure, Buddy,” I grinned, taking his snack cup. “You can have more Cheerios.”

My wife emerged from our bedroom having sufficiently business-casualed-out for work, and after reminding the dog not to jump up and shed on her (to no avail), she entered the playroom to bid the munchkins farewell for the day.

The Twins flocked to her, as they’ve come to know the drill. This was the last chance for Mommy Snuggles until later. In the meantime, they’d be stuck with Daddy, who used to get a rock star’s welcome home when he was still teaching almost a year ago, but has become old news now that he’s home five days a week.

My daughter was first, and after some solid XOXOX action, returned to the blanket fort she’d been constructing.

Next was my son, who leaned into Mommy and sat on her lap. Eyeing the clock, my wife grumbled, “Well, I guess I’d better go.”

She lifted my son to his feet and began to stand up herself. My son quickly turned to her with a gravely serious furrowed brow. Looking straight up at Mommy, he spoke.

My wife an I exchanged electrified glances.

“Did he just say–” I stammered.

“Oh my God, I think he wants more kisses!” Mommy beamed. “Do you want more kisses from Mommy, Buddy?”

Heart melting, my wife took a knee as our son giggled his way back into her arms.

I stood there in the kitchen, strawberry-covered scissors still slackly in hand, with a stunned smile. Never before had my son used “muh” for anything but food. Until now. 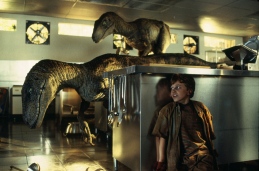 The Twins and me in our kitchen.

Moments like these are a full spectrum of emotions for me, kind of like the moment in Jurassic Park when the velociraptors figure out how to open doors–it’s simultaneously badass and terrifying. And that’s because for every thrill and chill of seeing their first triumphant moments of clarity, I flash back to the very beginning, to my first triumphant moment of holding two newborns in the hospital, tiny beings still learning to breathe, drink, and machine-gun fart. They started with nothing, and now they’re not only recognizing multiple meanings of words–they’re voicing opinions, problem-solving, becoming independent thinkers.

Holy psychological development, Batman! Am I ready for this?

Having obtained his additional kisses, my son shouted his patented “Did it!” before launching himself from Mommy’s lap into a victory lap.

He knew kisses meant she was leaving and realized she’d be back soon.

He just wanted a little muh.

If not, maybe check out a few muh.