I can’t believe I’m saying this, but this morning I dropped off the Twins for their first day of kindergarten.

Holy shit, you guys. Is this really happening?

Of course, I knew this day was coming, but that doesn’t lighten the blow of its actual arrival. It seems like just yesterday my son was calling me (or Chuck Norris) “Dada” for the first time, or my daughter was playing air guitar while breastfeeding, or my son was giving my wife a fecal soul patch, or my daughter was still sucking her thumb through thunderstorms and animatronic pirate encounters. But the timestamps are right there on photos and videos. There’s no arguing with the date I see on the calendar. Whether I want it to or not, time relentlessly sprints forward.

Five years ago, while reflecting on the first eight months of the Twins’ life, I wrote:

I’d prefer not to tritely say “They grow up so fast” (even though it’s SO true), so I hereby submit a far greater phrase for nation-sweeping candidacy: “They grow up faster than a Red-Bull-guzzling cheetah in a Lamborghini on the Autobahn with his pregnant, twin-carrying cheetah wife going into labor.”

Go ahead, picture that for a minute. Man. Now that’s fast.

As I read this today (and just barely remember writing it), I’d like to give my past self a high five because this just about nails it.

Here’s what really gets me. For the first three years of the Twins’ lives I was a stay-at-home dad, and for the remaining two and a half years I’ve worked from home. Aside from the fantastic childcare help we’ve gotten from my mother, sister-in-law, various preschools, and the rest of our “village,” I’ve pretty much been around the whole time. I’ve had more hours with the Twins than anyone else. Yet, now that they’re entering kindergarten, I still can’t help feeling like I “missed” stuff–that I somehow should have been around EVEN MORE. The rational part of me prescribes a chill pill, but the emotional side is like, “nuh-uh.”

Parent Guilt is a real thing, you guys. END_OF_DOCUMENT_TOKEN_TO_BE_REPLACED 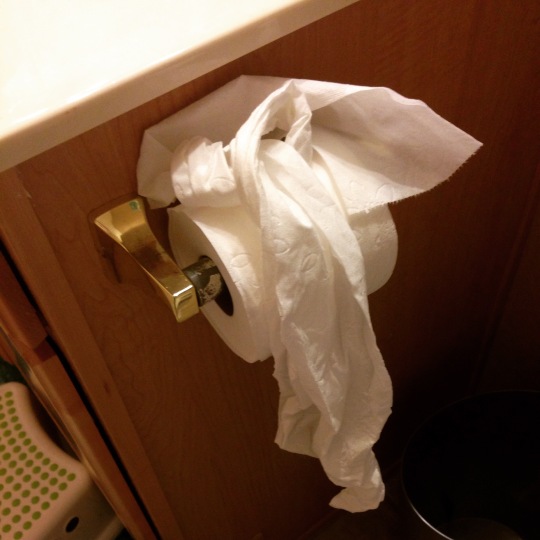 2. When we should already have left the house 15 minutes ago.

3. In the middle of an amusement park ride.

4. Every time we walk into Target.

5. Just as our doctor enters the room for a check-up after we’ve been waiting 45 minutes.

7. When a server is about to take our orders at a restaurant.

8. The moment our food arrives at a restaurant.

9. On our way out of a restaurant.

12. While I am sitting on the only available toilet.

13. While his sister is sitting on the only available toilet.

14. Three minutes after insisting he did not have to go while we were all in the public family restroom at the mall and each of his sisters dutifully utilized the toilet and changing table, but now we’re almost to the Disney Store on the other side of the mall.

15. While waiting in the McDonald’s drive-through line.

16. When he is on his bike five blocks from the house and claims to need to go too badly to pedal himself home and starts flipping the f*ck out and I somehow have to get his f*cking bike, his twin sister who is just too tired to pedal and her f*cking bike, and his baby sister and her stroller back home. Also, it is hot out. END_OF_DOCUMENT_TOKEN_TO_BE_REPLACED