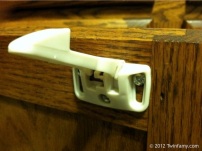 You never hear people say “I’d rather be installing child safety locks on my cabinets.”

I wanted to finish baby-proofing our house earlier. I really did. But it’s the thought that counts.

I had the best intentions when I began work in October, and have slowly made what I believe to be significant progress given the circumstances, as the project has been narrowly constrained by multiple, immovable factors:

I am apparently so incredibly awesome and compelling that my pint-sized fans cannot bear the thought of me leaving the room. Not to go to the bathroom, wash dishes, get diapers, or anything else that takes longer than five seconds. The Experts call this “separation anxiety.” I call it “the reason I can’t get anything done around the house unless I want an improvisational high-pitched duet as a soundtrack.” Due to sharp drills and screwdrivers and the same hazardous cabinet contents I’m trying to bar from their tiny, inquisitive hands, I can’t have them climbing all over me while I install latchery. Keeping them in the room with me as I work necessitates restrictive holding cells such as Pack ‘n’ Plays and Exersaucers, but they are proficiently crawling their way to walking any day now, and thus assertively refuse any restraints in efforts normally attributed to Wild Horses and Freebirds and Eyes of Tigers. These factors all imply that the ideal baby-proofing window is during a Nap Overlap or Ni-Night Time. Aside from the fact that a Nap Overlap itself is rare, the slightest of sounds from a pin dropping to a grizzly bear/man hybrid slamming a car door can wake them, so firing up the drill while they’re asleep is simply ill-advised.
.

Two of my weekdays are spent on campus studying in preparation for world domination. I have not yet taken my program’s Building and Remotely Controlling Your Own Robot Henchman 101 class, so baby-proofing production grinds to an unfortunate halt on these days. The remaining three weekdays are dedicated to house-husbanding and twin-wrangling, which, as I just mentioned, are not conducive to accomplishing anything but avoiding tantrums and occasionally escaping for a guerrilla laundry load. This leaves the weekends, the only time we are together as a family, during which we spend quality time driving around town running errands, and every once in a while, pretending we have a social life. This aspect has recently been amplified by…

Hmm… Let’s see… I could exhibit my unmatched pumpkin-carving prowess; eat turkey, stuffing, and cheesecake; open Christmas presents; have an excuse to actually “go out” and imbibe more alcohol than usual while celebrating the year; OR… install child safety locks. Well, that’s a no-brainer–I’ll take the child safety locks for $500, Alex.
.

These beautiful, game-changing devices have justified my laziness more than anything, as they have enabled us to simply keep the kids out of hazardous, non-proofed areas. But as I’ve already explained, the Twins are getting more and more aware of their confinement, and putting up with it less and less.

So since I finally had some semblance of time off during the Holidays, I (my wife) decided it was finally time to tackle this daunting task, and on New Year’s Eve she packed the kids into the car and took off for the afternoon, finally affording me the necessary circumstances for full cabinet and drawer lockdown.

I have previously revealed that I am a ninja, and also, ironically, that I am quite the klutz, earning me the accolade of The Clumsiest Ninja in our graduating clan’s yearbook, and one special feature of any projects I undertake involving power tools is best explained by the following tweet:

It's not officially a home improvement project until I draw my own blood. And guess what? I just made this one official.

So how, you may ask, did I make it official?

Well, on the way back to my work area after answering nature’s call, I failed to remember that I had left the drill on the kitchen floor, and because I was barefoot (like all expert carpenters), I proceeded to kick the drill bit head-on, sending the tool sailing several feet in front of me. 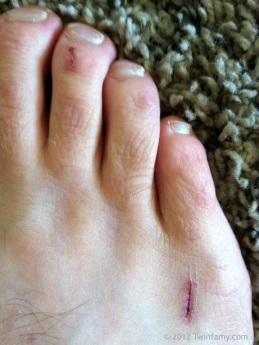 The wound after 7 days of Ninja Healing. (Try to contain yourselves at the sight of my entrancing foot, ladies.

To my credit, my blow was so powerful that I snapped the bit in two, rendering it useless.

However, this did not faze me in the slightest. I have an impressive arsenal of first, second and even third aid products on hand for such unfortunate occasions, and once the bleeding finally stopped, I proceeded to successfully latchify all necessary storage components.

Well, all except one.

But that’s another story.

Will the power drill seek vengeance for its dearly departed drill bit? Will John Pseudonymous ever finish baby-proofing? How much more blood must be spilled before this injustice ends?

Be not afraid, O Loyal Reader! All will be revealed in the riveting continuation:

If not, I apologize.