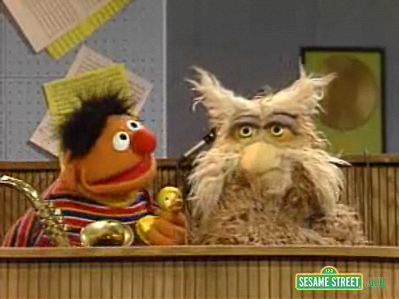 If there’s one thing I learned while growing up, it’s that–in the words of the great philosopher Hoots the Owl—“You gotta put down the Duckie if you wanna play the saxophone.”

I’ve since devised lifehacks allowing me to defy this nocturnal avian jazz musician’s First Law of Multi-Tasking, deftly blowing the perpetual 12-bar solo that is being a husband, dad, and student while still keeping a firm grip on the duckie that is this fine publication. However, during the month of July, the song’s tempo sped to a breakneck punk rock moshpit pace, and as I attempted to keep up with the chord changes, the poor little duckie came flying out of my hand.

Since I know you hang on my every Twincident, O Loyal Reader, I’m sure you noticed things have been considerably quiet ’round these parts. I’ve always told myself I’d never let writing about being a dad get in the way of actually being a dad, and the past few weeks found me in that very position. While writing is a deep passion of mine, I can’t let it jeopardize my sax life.

I had to huck the duck.

But now that the band has slowed back down to its smooth jazz roots, the duckie’s back where it belongs. Accordingly, several brainchildren are already starting to claw their way out of me, but before I get to those, I figured I’d offer a glimpse at my epic, duckless saxophone solo before I take a few deep breaths and return to normalcy. Not only will this finally provide you with the answers that have been keeping you awake at night–it will also give some context for what’s to come without weighing it down with over-exposition reminiscent of J. R. R. Tolkien’s The Lord of the Rings. (I don’t care what the damn tree bark looks like–what happens next?!)

My mother left for a two week vacation. As you may remember, she wrangles the Twins two days a week while I’m on campus getting my Ph.D. on. As The Only Line of Defense Against No Child Care, I forfeited the vastly important two-day-a-week schedule for no-days-a-week, putting me significantly behind in my three summer classes, two research assistantships, and a partridge in a pear tree.

Then, as luck would have it, the Twins got stomach bugs. Crappy naps and doctor appointments even further infiltrated the time I already did not have. But we got through it and near the tail-end of my mother’s trip, the Twins had successfully rebooted to normal health. The worst was over. My mother would come home, I’d catch back up with my nerdery, and gospel choirs would inexplicably spring out of kitchen appliances and cabinets belting the “Hallelujah Chorus.”

Or so I thought.

The day after my mother got back, my son woke up with a fever of 103° F and was unable to keep any fluids down. I gallantly skipped a crucial catch-up day on campus for yet another pediatric adventure and taking care of my poor, deflated little boy until the bug passed. And then, of course, because they share everything, my daughter got it, too. So much for catching up on school. The snowball grew.

The Twins finally feeling better (again), I had my mother take them a few extra days (thanks, Mom!) in order to do absolutely nothing but melt the snowball. My hands literally throbbed in pain by the end of the week due to the excessive trackpadding and typing of papers, emails, and research proposals. Not only did I need to make up for lost time–I also needed to get ahead in preparation for…

Taking a much-needed family vacation to Southern California, including several days on the beach and the Twins’ First Ever Visit to Disneyland. Conveniently, my son started barking with a croup cough two days before we left, but we powered through while basking in the glow of Disney Magic, resulting in some of my favorite memories with my children to date.

And honestly, that’s what this little rundown is really for–a fast-forward through several relatively dull weeks of booger-wiping and paper-typing to The Good Stuff: my first Disney experience as a parent.

In a spirit similar to my critically un-acclaimed TwinfaMaui series, I hereby present Twinfamyland: A California Adventure, a forthcoming collection of California-flavored Twincidents (avocado will cost extra) detailing what happened when this family of stick figures left our home in Arizona for some California grass.

While we have now gotten back to where we once belonged, the legend shall live on…

If not, why don’t you get back to where you once belonged?