Giggling, I replied “That’s what she sai–”

“Don’t. Just get another one.” 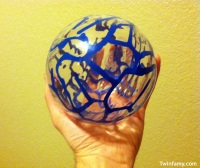 The Ball We Need More Of

We were in the midst of a Clash of the Ti-twins over a ball, only one of which was out in the living room with them. When an item changes hands between my loinfruits every five seconds punctuated by banshee screams and floor flails, it can get ugly pretty quickly, hence my wife’s desperation. She kept them separated like a boxing referee listening to The Offspring while I hopped the baby gate and scoured the playroom for more balls, trying to suppress the flood of terribly unfunny ball-related innuendos I wanted to crack.

Does ball size matter?
Where would you like me to put the balls?
Will the deflated balls still work?

END_OF_DOCUMENT_TOKEN_TO_BE_REPLACED

I stayed up later than usual the other night to put some finishing touches on a Twincident or five.

When my wife decided to go to sleep, I said I’d just be a minute more.

When I finally crawled into bed, she glanced at the clock and said, “That was much longer than a minute.”

There was, of course, only one logical response for me to give:

If not, let’s meet in the conference room in five minutes to hash this out.