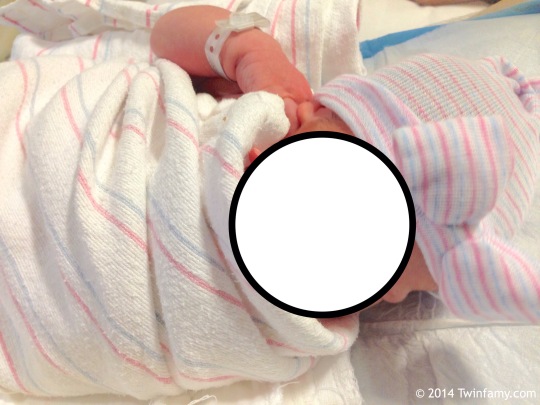 Teenie Tiny Pseudonymous was born atop the Stratosphere, Las Vegas at 8:41 pm on Wednesday, December 17, 2014. She was delivered by an elite team of board certified Cirque du Soleil performers who–in collaboration with Mrs. Pseudonymous’s well-orchestrated pushing–perfectly timed the delivery with the opening Ringo Starr drum solo of The Beatles’ “LOVE” show. Then, just as Teenie’s head emerged from her mother’s hoo-hoo, an electromagnetic pulse was inexplicably unleashed, triggering all slot machines within a five-mile radius to display three consecutive bow-wearing stick figures and completely empty themselves of coins, much to the delight of cheap, low-stakes patrons (and to the disappointment of “the house,” who apparently does not always win after all). Via a system of pulleys and bicycles, the Soleil performers then counterbalanced the infant with an elephant, a grand piano, and a pint of Guinness, and after consulting Siri, declared the infant to weigh in at .0032885 metric tons (all, of course, to the tune of The Beatles’ “Carry That Weight”).