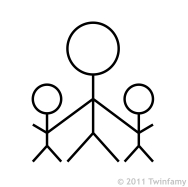 “So…I think you should quit your job and stay home with the kids.”

I slapped myself in the face repeatedly, forcing my dozing eyes open so as not to veer off the freeway, t-bone a concrete slab, and send my weary head through shards of broken windshield, thus widowing my poor wife and newborn fraternal twins, never to be able to tell my great grandchildren tales riddled with outrageous claims about how many New York Times bestsellers I wrote back in the day.  When you’re a new parent, you suddenly grow an incredible appreciation for as many moments of sleep you can get, as well as beverages containing enough caffeine to wake the dead.  Unfortunately, the Coke I’d drank during my last period class had gotten me through the lesson, but had conveniently tapered off just as I’d gotten on the road.

At the time, we were getting about three hours of sleep on a good night.  It’s difficult enough to get rest when you have one newborn, as I’ve been told, anyway.  I wouldn’t know because these are our first two, and I don’t have the experience of only one baby with which to compare it.  I will say that it’s a rare, triumphant event during the first few weeks when both twins are asleep at the same time.  They do not come with a synchronization feature, and tech support has stated that there are no current upgrades in the works.

This means that any time one wakes up, you are on red alert because any noise whatsoever from the first could wake the other.  However, you are also faced with the possible decision of intentionally waking the other in an effort to create your own synchronization system.  All the books suggest it, but was the chapter you fell asleep reading relevant in this exact situation?  Maybe you and your spouse should just stand there, staring at each other, waiting for the other to make an executive decision.  Maybe you can pretend you’re sleepwalking, so she’ll have to make the call.  But wait, is she actually sleepwalking?  The silent deliberation is then broken by the sound of your poor, as-of-late neglected canine, who insists on letting the thug with the thumping bass in his hot rod know that she can hear him and does not like it.  She’s more of an indie rock fan.

And so twin number two is up, startle reflex triggered, causing what looks like a breakneck rendition of Swan Lake and culminating in an inventive new blood-curdling shriek, finding octaves you did not realize were in a newborn’s register.  We need to get her a voice coach.  I should write that down.

Then, amidst the chaos, one of the little people in question rests a tiny hand on your arm or shoots you a rare bashful smile, and you are reminded that this is all totally and completely worth it.

These were our nights.

A few more whacks to the face and I was good to go, with the added bonus of rosy cheeks.  I had returned to my job as a middle school English teacher two weeks ago and this, paired with sleepless nights, made the drive home one of the day’s most daunting tasks.  At the same time, it gave me a phenomenal excuse to roll every window down and crank obnoxious punk rock up to 11 as if I were still in high school, which is always great fun.  I especially appreciate this as a new reason to justify the purchase of such sonic greatness to my wife, who finds snotty old-school hardcore to be a particularly challenging listen.

My attempt to cross the threshold of the Central Twintelligence Agency (my home) was thwarted.  After a few attempts at opening the door (and a few WTFs), I realized the culprit: the open door of our front-loading dryer.  This is a feature of our house that I will surely employ in the event of a zombie apocalypse.  “Babe, I can’t get in again!”

After wading through the pink-and-light-blue rubble and changing out of the clothes that had God-knows-what all over them from tween sneezes and coughs, I gave my hands a good scrub, and kissed my bleary-eyed wife, who was on the couch with my son and daughter in each arm.  My children perked up and kicked with wide-eyed excitement at the sound of Daddy’s voice, and my dog, who was gated in the kitchen/dog lounge, performed the “welcome home” ritual I’ve come to expect, the old I’m-so-excited-you’re-home-that-if-you-don’t-get-me-outside-in-five-seconds-I-will-urinate-on-the-floor gag.

I finally plopped down on the couch with my son in my lap, and smiled at my wife, happy to be home again.  “So, how was today?”

“Pretty good.  So…I think you should quit your job and stay home with the kids starting in the fall.”

“No, I’m serious.  You should stay home with the kids.  I thought about it and I think it’s a great idea.  Plus, you could start taking classes again and finish your Ph.D. sooner.”

I was dumbstruck.  And, of course, the only logical response was, “How about Taco Bell?”

Suffice it to say that after some processing time (and two Beefy Crunch Burritos), I realized my wife—as always—had an excellent point, and after further discussion, we decided that when the school year ended this May, I would start my brand new position: trophy husband.

Luckily, I was the only applicant.

And thus began preparations for a new chapter in my life, a date which will live in twinfamy.

This blog will chronicle my adventures as a new, stay-at-home father of twins.  Since there are comparatively fewer stay-at-home dads and even fewer who have twins, I’m hoping that other dads in my situation will especially benefit from reading this.  At the same time, it isn’t exclusively for them.

I’m a brand new parent, and I’ll never claim to be an expert, but I do plan on sharing what I’ve found to work well with my kids, as well as what hasn’t.  Because my wife and I are experiencing boy and girl newborns simultaneously, we have the unique opportunity to offer—for lack of a better term—two different “case studies” to other new parents.  Also, out of necessity, we’re constantly searching for new ways and products that make caring for two babies at the same time more efficient, and in that way, I feel all new parents—and especially new parents of multiples—will find it helpful.

When we get right down to it, though, this blog is really for anyone and everyone.  As a soon-to-be-former middle school English teacher who has needed to hold uninterested young minds’ attention for a living, I believe learning is amplified and enhanced by things that are awesome.  For that reason (and, admittedly, my own enjoyment) I’m going to make this as entertaining as I can.  I’m going to tell stories instead of making lame, boring lists that sound like a robot crapped them out.  So this is also going to be a sort of sitcom-y memoir, which could be enjoyed by anyone with amazing taste and who knows sheer genius when they see it.  (That’s you!)

I don’t know exactly what to expect, but I do know it will be incredible because I’ll have the privilege of spending most of my time with my little boy and girl, who make life absolutely beautiful (along, of course, with my wife—love you, babe!).

I hope you stay tuned, and enjoy.