My son has created a catch phrase that very well could sweep the nation. You may not have heard it yet because it is currently being swept under the nation’s rug, but once this news hits the interweb, look out.

The pop culture revolution began with my mother, who watches the Twins twice a week while I doctorize on campus. As the kids slowly become geniuses just like their parents, they are constantly acquiring new skills and lifehacks–like standing up and walking on their own, infiltrating government-grade security measures, or composing their very first rock opera (entitled American Infant) with nothing but a toy xylophone and Daddy’s GarageBand app. 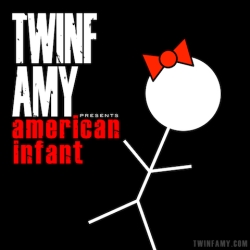 No word on a release date yet. They still haven't learned what that is.

Appropriately, whenever the Twins would use their newfound superpowers for good, my mother made a point to positively reinforce these behaviors, thus congratulating, “You did it!”

This became an overnight chart-topper with the kids, and soon, around November, every time my son accomplished a task, he’d triumphantly proclaim, “Did it!”