The rare, sought-after occurrence (especially among stay-at-home parents) of orchestrating all of one’s children to nap simultaneously, awarding the ecstatic parent the opportunity to do whatever he or she desires…at least for a little while. Often punctuated and commemorated with celebratory acts such as Twinfamy’s “Holy Crap, a Nap Overlap” Shuffle. 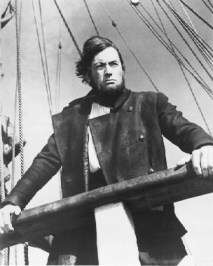 A weathered father remains vigilant for a Nap Overlap opportunity.

Due to an unwelcome household visit from the fabled Teething Fairy, the ever-elusive Nap Overlap had now become the stay-at-home father’s White Whale–his obsession–while his tiny first mates alternated between laughing in his exhausted face and wailing along with the Sirens just off the rocky coast.

This ingested lifeboat symbolizes the father’s shattered hopes of catching 15 minutes of a television show that does not feature singing puppets, eating a lunch that does not come out of a wrapper, or even just zoning out at the wall zombie-style for a few minutes.

If not, watch out for those Sirens on your way out. They sing a killer rendition of “Bohemian Rhapsody.”

Almost gets me every time.