If MacGyver were a ninja, he’d be unstoppable. His unmatched improvisational found-item remedies have gotten him out of many a jam, and if melded with the stealth, agile, disciplined strength of a ninja, he would be vulnerable only to Chuck Norris and God himself.

Ninja MacGyver's mullet would flow freely, unencumbered by his mask.

Now let’s say someone besides Ninja MacGyver were to exhibit these qualities. It would inspire an amalgam of awe, respect, and just a dash of fear in this amazing individual’s fellow man, right?

Well, I am here to tell you that I have found such a person, and that I am he. 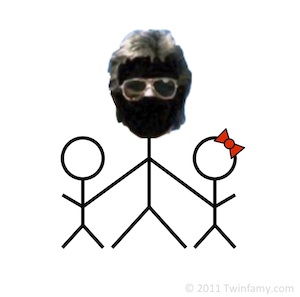 Allow me to explain.

We moved this past weekend, and while moving is never the greatest thing since Al Gore single-handedly invented the Internet, we’re thrilled with our new place. Sure, many of its major appliances were either nonexistent (washer and dryer) or broken (dishwasher and refrigerator) when we arrived, but we’ll get there. The important part–the reason we moved–is that we’re back in Phoenix. For financial reasons, we moved 30 minutes away from our family, friends, and civilization in general a year ago. The hour-long round trip essentially forced us to be more antisocial than we’d prefer, cramming multiple events, errands and visits into marathon weekends with the Twinfants and their feeding/changing/playing accessories in tow. While the constant commute wore on us, the Twins made it all worth it.

But now we’re back, and the country roads that took us home to a place we didn’t belong are fading from memory, as if all a bad dream.

However, the week before we achieved manifest destiny, I entrusted the Twinfants to the care of their Grandma and made trips to the new house to drop off fragile items (you know, ice sculptures, taxidermic animals, cinderblocks…) and make preparations to facilitate the influx of boxes we are still tripping over. One of these tasks was to acquire and program new garage door remotes since we were not left any by the previous occupants.

I’d done this before and selected my go-to universal remote, as it is one of few automated products with instructions that actually mean it when they say setup only takes five minutes. Behold the Chamberlain Clicker:

However, the five minutes it usually takes to sync this remote was thwarted by the bane of many consumers, the dreaded plastic packaging: 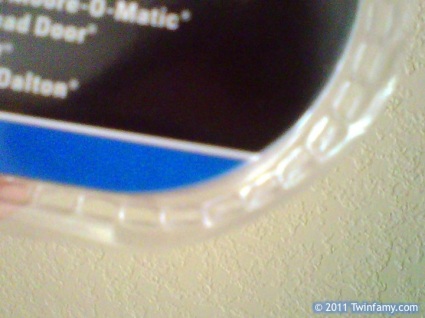 Upon seeing this, I thought, No problem. I’ll just go get the scissors… Oh. Sh!t.

It was at that moment I realized I had no scissors.

I had no knife.

All I had was the aforementioned fragile odds and ends we were too lazy to box.

I wasn’t about to drive 30 minutes back to our other house and 30 minutes back, and after spending three hours store-hopping for new house supplies, I really didn’t want to buy new ones, especially since we already own five.

My gut reaction was to channel my inner Larry David.

But after a deep, calming breath, I decided to survey the house and see what I had to work with. None of my keys were sharp enough, and too-thin picture-hanging nails left in the walls were also a bust. Even Christopher’s (our mounted sabre tooth tiger) fangs were too dull. I paced from room to room, about to give up.

Then, a heavenly beacon of light shone upon these:

I’ve stated previously that my wife and I are ninjas, but I’ve suspected your skepticism, O Loyal Reader. Maybe now you’ll believe me.

A smile slashed clear through my peeved demeanor. YES.

This life-changing moment immediately reminded me of a certain Bruce Willis scene in Pulp Fiction.

Figuring it would give me the most leverage (and since I have nothing to prove phallically) I selected the shortest blade. 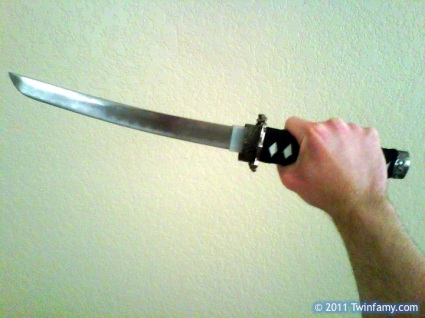 I strategically positioned it. 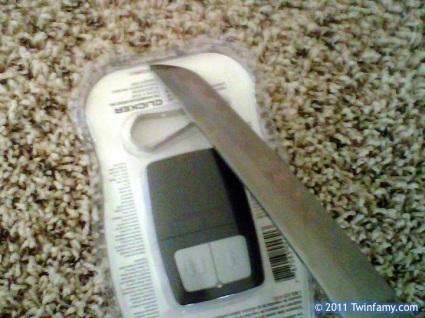 This angle allowed me to pull the other end toward me while jabbing forward. 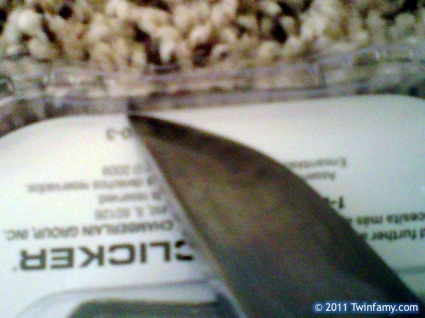 Before the first incision.

Then, remembering my internship with Pai Mei, I harnessed my chi and lashed forward in one powerful, lighnting-quick motion.

The moment of penetration (huh-huh), as captured by my high-speed camera.

The impenetrable seal had been vanquished. The heavens sang. 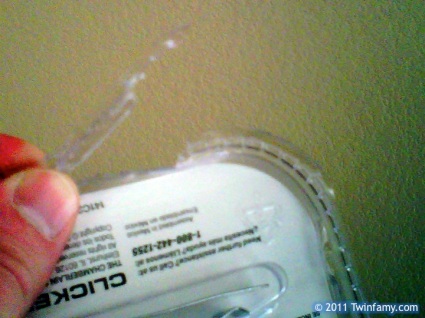 Out of respect for my adversary, I switched to more civilized hand-to-hand combat to finish it off. 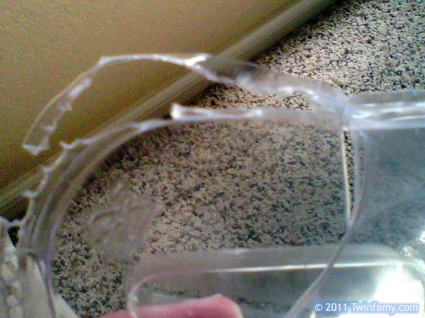 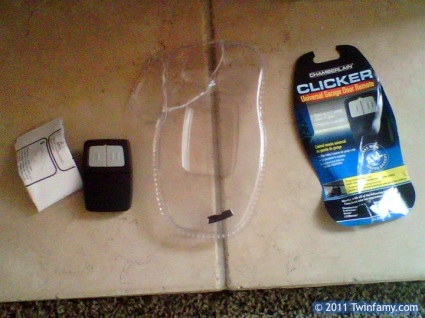 Between Semi-Durable Plastic and Stay-at-Home Ninja MacGyver, I am The Deadliest Warrior.

Having watched his brother fall to a gruesome demise, the package for the second remote was already waving a white flag as I scissor-kicked towards it. No contest.

The battle won, I flaunted my bounty in an elaborate procession to the garage, where I found the garage door opener sealed shut with Phillips head screws.

And I had no screwdriver.

I eyed the sword for a moment. Maybe if I… No. Bad idea.

Sighing in defeat, I backflipped into the house and started looking for a Phillips head.

If not, you probably shouldn’t say it out loud. I may hear you.