I was already mourning the morning walk.

Before we’d even traveled a block my dog had decided to lead the caravan, walking directly in front of the jogging stroller, her hindquarters mere inches from the front wheel. I don’t know why she insists upon this walking arrangement–maybe she likes to think she’s in charge–but(t) it never “ends” well for her, typically culminating in me literally running her ass over. It begins when she looks back at the stroller and decides she is terrified of it, so terrified that she freezes in place, causing the usually-taut leash to slack and wrap around the stroller’s back axle, putting us at a dead stop just after the tire bumps her square on the cheeks. I do my best to stop before the butt-bump, but she forces me to tailgate her at an unsafe following distance. 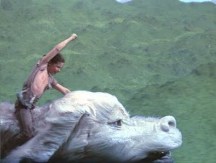 It would be a lot easier (and fun) if my dog could fly.

On this particular day, she had jumped to deer-in-headlights mode so abruptly and forcibly that it had pulled her harness clean off. (We attach the leash to her harness and not her collar because after years of scientific research, we have determined she would rather be choked to death than respond to leash tugs.) And because my dog just barely qualifies as obedient, I knew I had to act quickly on this leashless freedom unless I wanted to choose between:

1) chasing her around the neighborhood, loudly cussing her out while she thinks its a game, waking the Twins from their stroller catnaps and yielding a sterophonic meltdown; or

2) tritely employing the if-you-love-her-set-her-free-and-if-she-never-returns-she-was-never-yours axiom, which would most likely mean never seeing my beloved canine again, as she would surely make a grand exit from this life in Harry Houdini fashion while performing her famous freezing-in-front-of-an-oncoming vehicle trick.

It was in that moment that I remembered I am a ninja, as my keen, subconscious reflexes sprang into action, one-handedly snagging her by the tail, keeping the other hand firmly planted on the stroller.

She turned her head towards me, dumbly panting with glee, as if to say. “That was fun, Dad!”