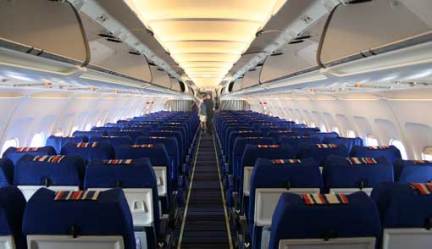 I grimaced as the all-too-familiar sound of my daughter’s signature baby cuss-fests reverberated throughout the cabin of our 757. Her inflection was remarkably similar to a Ricky Ricardo Spanish flipout as she rattled off unintelligible rapid-fire syllables.

Typically, these soliloquies have me in stitches. The invariable final “BAH” and its emphatic arm thrust just kills me every time.

But here and now, all I could muster was a nervous smile at my wife across the aisle, who flashed a quick one back while wrestling our tiny squirming diva in her lap.

Since two lap kids aren’t allowed in the same three-seat half-row, my wife had elected to fly solo while my son and I sat on the other side with my parents. The plan was to take turns and rotate seats as necessary throughout the flight, but for now, with the “fasten seat belts” sign lit and the crew preparing for take-off, we were locked into this configuration. We had booked the flight to coincide with their naptime in hopes they would crash for a significant portion of it, but the TSA security shuffle and unfamiliar surroundings now had them simultaneously wired and tired. And grumpy as hell.

END_OF_DOCUMENT_TOKEN_TO_BE_REPLACED

“No, Buddy, I just told you, your sister is reading that,” I said, prying the coveted Elmo’s ABC Book from his hand, prompting an eloquent baby cuss reply.

Sighing heavily, I returned the pillaged book to my daughter, who kicked jubilantly, as the plot was really heating up around “Q is for quilt” and she was on the edge of her seat on the playroom floor, just dying to see what letter was next. 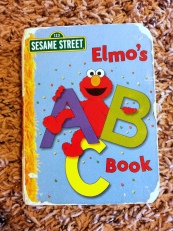 It's not just a great read--it also tastes delicious.

I turned back to my thieving son. “Buddy, you have five books already. Why don’t we read one of those?”

My son approaches playtime the same way I envision Napoleon Bonaparte would at one year old. Whenever he’s decided what to play with, he desperately needs that toy genre’s entire collection. If it’s blocks, they all simply must encircle him. If it’s books, he needs a shelf-full at his disposal. I’m quite certain that if he were aware of Pokemon, he would not rest until adequately “catching ’em all.”

Thus, if the parent-on-duty does not facilitate total toy acquisition, we can expect a fiery rage turning his skin green and inflating his muscles to three times their normal size, ironically tearing his Incredible Hulk t-shirt to shreds.

END_OF_DOCUMENT_TOKEN_TO_BE_REPLACED 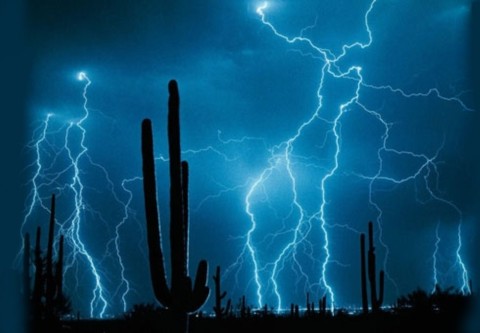 I awoke suddenly to sheets of rain tap-dancing on the roof, werewolf-howl wind gusts, and the white-noise hiss of our baby monitor, my wife’s intent yet exhausted face lit by the screen.

“He’s awake.” She turned the monitor to display my son in his crib, tossing restlessly. I glanced at the clock. 3:20 am.

“Still out,” she replied, just as the monitor toggled to our daughter, fast asleep.  My wife dubiously shook her head. “How are you just now waking up? How can you sleep through this?”

A bright flash lit the room momentarily, followed by thunderclap that literally rattled the house. 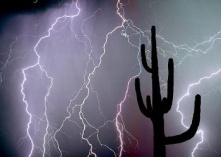 She shot me a the-deafening-storm-you’ve-been-sleeping-through-you-lucky-bastard kind of look. My wife is a light sleeper, so she wakes up often at night and sometimes gets jealous of my hibernation-grade slumber intensity, particularly during nights like this.

We are in the midst of what Arizonans call “Monsoon Season,” a time during which we are graced not only with three-digit heat, but also higher-than-usual humidity and a wave of tropical thunderstorms, including the most massive dust storm Phoenix has seen in years–or as I learned the day after the storm, the proper term is haboob. (Yes, really. How exciting is that?!) So, with that in mind, check out these pictures of this enormous, mind-blowing, spectacular haboob, from TWO angles!

While it was incredibly cool to experience (at one point we couldn’t see anything further than five feet out the windows as the tannish fog enveloped the house), the timing was not ideal. The storm hit just as we were putting the Twins down for bed, so despite the soothing simulated-heartbeat jams of their Sound Machines (which I believe are from Miami), the rattling windows, moaning gusts, and our yapping watchdog kept them awake, which allowed them the opportunity to complement the clamor outside with alternating cries akin to dueling guitar solos. 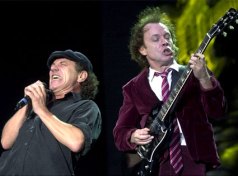 Luckily, neither the storm nor the solos Shook Us All Night Long.

I remembered the haboob experience as the sky paparazzi flashed another photo.

Not that I was hoping for it, but I definitely had to accept it as a possibility. But then, my selfish heart melted when I actually thought of the Twinfants, alone in their beds, waking with a start, never having heard or experienced such a loud, sensory-overloading thing. Recalling my own childhood and how terrified I’d get of lightning storms, I became totally okay with soothing them and letting them know everything would be okay. 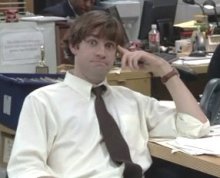 I don't know if he's saying "hi" or mocking me.

My son flipped from his side to his back, his eyes wide open, looking up at the camera. I swear he already knows what it is and what it does because all the time I catch him half-smirking directly at it like Dunder-Mifflin’s Jim Halpert.

After a few minutes of silently willing him back to sleep, my wife and I gently high-fived as he found his thumb and sucked it all the way back to Sleepy Town.

“Okay,” I murmured, leaning over to kiss my wife. “Good ni–”

FLASH! (Yes, that is an onomatopoeia that doesn’t actually make a sound.) BANG!

Sure enough, there my daughter was, exhaling loudly, whipping what little hair she has back and forth. Now, she worried me even more. She’s a little more high-strung and observant than my son. Her eyes like dinner plates, she has a thirst for life in general and passionately takes in everything she encounters. This curiosity will serve her well, but it also causes her to get easily overwhelmed by situations that overload her senses. Such as bright flashes of light and loud booms. 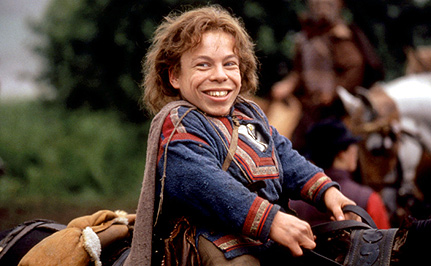 The whipping-back-and-forth-of-hair phenomenon is credited to Willow Ufgood, who heroically did so while saving a baby from the evil queen Bavmorda.

The back-and-forth hair-whipping slowed to an alert halt at another flash and bang. Her eyes widened.

Oh no. Here it comes.

And then something incredible happened.

She just lost her mind laughing.

And then, in utter shock, so did we.

Each crash intensified her hysterics to a higher, more jubilant octave, rolling mirthfully back and forth as the storm raged on, while my wife and I tried to stifle belly laughs so the three of us wouldn’t wake my son.

Eventually, she tired herself out, found a tasty finger, and collapsed.

My wife and I, on the other hand, were now fully awake from laughing until we cried.

In fact, we listened to the sky explode for another hour, returning fire with overdramatic sighs and obscenities.

If not, maybe you just need to think of the word “haboob.” Huh-huh. Haboob.