“Mama. Mama. Mamamamama,” my wife enunciated steadily, in stark contrast to the hyperactive limb-chase she was currently undertaking–attempting to get my son’s frantic arms and legs into his pajamas.

“Thhhhhhhhhh,” he replied, creating a froth of his patented saliva bubbles.

“I think he almost got it that time,” I snarked from the rocking chair, with my daughter riding lap jockey.

Ever since my son said “Dada” for the first time (possibly because of my Chuck Norris t-shirt), my wife has been working on “Mama” with both kids, with little apparent success.

Bathtime had gone swimmingly and we were now preparing the Twins for bed. Typically, we each bathe and dress one kid, alternating them every other bath. That way, we both have equal opportunities at the completely polar-opposite bathing experiences my son and daughter have to offer. In order to better illustrate the differences, I will analogize with everyday beverages you can find around the house.

Washing our daughter is a fairly low-energy endeavor–she’s content to sit and simply enjoy the aquatic epidermal sensation. If my daughter’s bathtime were a libation, it would be a glass of fine wine–one drank at the end of a long day and savored slowly because it was so freaking expensive.

On the other hand, my son is more of a Red Bull tallboy. Put this strapping young lad in the tub and brace yourself (and him) for Olympic-sized splashes, incessant scuba diving attempts, and the golden eruption of Old Faithful. We’ve found that one hand on him at all times is the best practice, as well as mentally preparing oneself for an action sequence that would overwhelm even Michael Bay before plunging into Splash Mountain.

My wife had braved the one-boy-monsoon on this particular night, while I had handled my daughter, who, now that she was in her pajamas and NOT yet drinking The Bottle That Always Comes After Pajamas, was getting antsy.

Sitting her down in the rocking chair and kneeling in front of her, I surveyed the stuffed animals congregating on the floor next to me and selected her jumbo pink Sock Monkey, which is about twice her size. She cocked an eyebrow and wrinkled her forehead, unsure about all this whole not-drinking-a-bottle business. 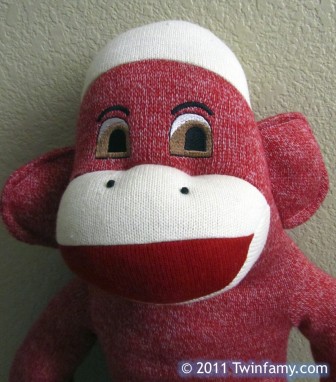 Hi there little girl! I’m Pink Sock Monkey! I sure am hungry–do you happen to have any Pink Sock Bananas?

Get your mind out of the gutter, O Loyal Reader.

In one motion, my daughter spun away from the monkey, looked right at me, and held my gaze while batting the peripheral pink primate out of view, as if to say, “Why are you bullsh!tting me, Dad?”

I heard my wife cracking up behind me. “Smart little girl.”

Letting my ill-conceived ventriloquist dummy fall back into the pile, I chuckled and picked her up. “I guess nothing gets by you, huh?”

It was then that she swung her arm and delivered a tiny face-five to my nose.

My wife stifled a laugh.

“Babababababa,” asserted my daughter. We’re not sure if her undying love for bottles has prompted her to actually say “Baba,” if it’s just her favorite syllable, or both. Either way, with two strikes on me already, I figured I’d better swing away.

If not, remain vigilant for splashes and face-fives.

Wife: Our son just flung vomit into my mouth.

Me: Yay, another milestone! Where’s his baby book?

I was not present at the Time of Flinging, for I was slaying daughter diaper poo in another room, but legend has it that the tragic trajectory events occurred as follows. 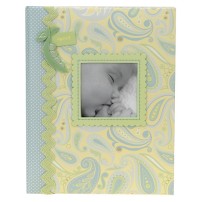 There wasn't enough room in the book, so I wrote a link to this post instead.

Our son is a loose cannon in the spit-up department. Since his first day outside of his mother, he’s had a flair for reflux. We’ve been told this is more common with boys than girls and that it typically disappears after 12 months. In the meantime, however, my son often needs as many wardrobe changes as you would expect from Lady Gaga live in terrible concert. Bibs are no match for his vomit comets. Sure, they work okay, but ponchos would work better.

As his parents, my wife and I are constantly in the line of fire, enjoying refreshing vomit rinses multiple times daily. I can’t remember a day since I began house-husbanding that I did not need to change my shirt due to battle damage. Now, keep in mind, it’s high summer in the arid, scorching Arizona desert. Wussy, coin-sized spots dry right up and do not necessitate a wardrobe change. In contrast, here is an accurate depiction of the quality of work you can expect from him, as modeled by my lovely Who t-shirt. 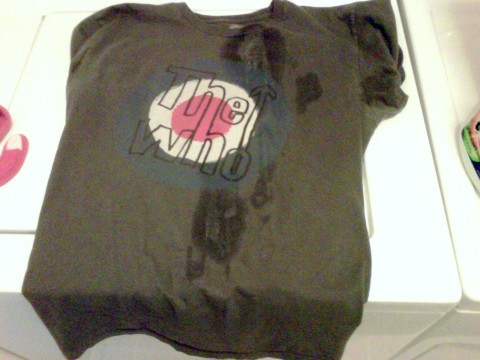 I thought I'd sufficiently burped him. I Won't Get Fooled Again.

After the day’s last feeding, we always feel we’re walking on eggshells that have already been slightly cracked by someone at the grocery store and that actually burst apart when pulled from the carton in an attempt to assemble them into a walkway, leaving us with egg on our faces and everywhere else. But the egg is vomit.

This is because once he’s had his last bottle, he could blow at any moment, but we need to get him ready for bed and put on his pajamas. So we do, so that he can hose them down, prompting Pajama Change 2: Return of the Reflux. And then he drenches those. and we initiate Pajama Change 3-D: This Time It’s Personal. And so on.

Not only is this process simply annoying, the re-changes often re-invigorate him when he’s just about to drift off, keeping him up later than he should be, depriving himself of much-needed slumber, and most importantly, infiltrating Mommy and Daddy’s only few hours to ourselves. How can I pretend to be interested in my wife’s So You Think You Can Dance commentary while flinging Angry Birds if he doesn’t go to sleep?

So when Old Faithful is about to be faithful, we are perfectly okay with doing anything we can do to keep his pajamas dry, even to the point of taking the bullet ourselves. One method we like to use is the Use My Hand as a Barf Bag Method (UMHAABBM), in which the user cups a hand and, well, you get it.

All right, now that you’ve been briefed, here is how the Great Vomit Fling of 2011 came to pass.

Into my wife’s mouth.

Eyewitnesses claim it began with the groan we have come to identify as “Fire in the hole.” My wife, who was sitting with him on the couch, valiantly administered the UMHAABBM with great success, inheriting a wrist-adjacent pool of formula, breast milk, rice cereal and prune baby food, spilling only a few drops and leaving my son’s PJs unscathed.

As she deftly balanced herself so as to not spill this treasure, my son noticed his hand, and remembering it to be an excellent appendage on which to suck, brought it to his mouth, still dripping upchuck.

He then glimpsed Mommy’s Bangs, another tried-and-true snack with the additional appeal of The Squeaky Sound Mommy Makes When I Pull and Don’t Let Go. His hand shot right for it. 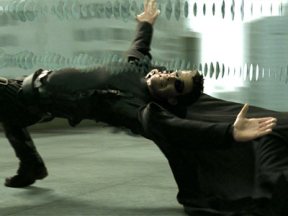 Now, I may get in trouble with our Clan for divulging this, but my wife and I are ninjas. So in a move akin to Neo’s Bullet-Time dodge in the only good Matrix film, she successfully eluded his swipe, but–after a long day at work–did not account for the globule of vomit launched in the strike.

In its wake, not a day goes by since last night when it happened, that I don’t hear people ask, “Where were you when the vomit fell?”

They respond with awe and wonder when I casually remark, “In the next room, changing a diaper. No big deal.”

But it was a big deal.

At least to my wife.

My wife has observed that Twincidents have tended to feature humor at her expense–sticking her face in my son’s feces for example. She explicitly stated that she does not mind because such experiences happen to all parents. However, she did suggest writing about my own unfortunate twin run-ins, to which I responded, “But I can’t think of one. Can you?”

“Actually, no, not really.”

…but that’s another story.

If not, at least try to get it in my cupped hand.