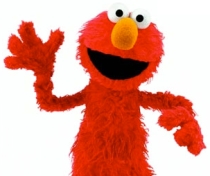 Oh, hi, Loyal Readers! Welcome to Twinfamy’s World! John is so happy to see you, and so are John’s Twins.

Can you guess what John is thinking about today? That’s right–Elmo!

John has been watching Sesame Street with John’s Twins for a few months now and John has learned a lot about Elmo, but John has noticed some things about Elmo that confuse John. Unlike Elmo, John has no self-aware drawers and doesn’t have a family of mimes lurking outside John’s window who are always waiting with a smile when “Shade” goes up, so John wondered how to find out more about Elmo’s Worldview.

Then, suddenly, John had a spectacular idea–John should write Elmo a letter!

Here is John’s letter to Elmo:

First of all, John wants to say that John is a huge fan of Elmo’s, and has been ever since John was just a little boy. John remembers when Elmo got his first big break on Sesame Street, starting with only a few special guest appearances, but look at Elmo now! Elmo is the star! Yaaaaay! Plus, whatever Elmo is doing to stay in shape must be working because Elmo doesn’t seem to have aged a day.

John knows that Elmo has haters who are angry about Elmo taking Sesame Street by storm, “stealing” the spotlight away from traditional Street Performers like Big Bird, Oscar, Bert, Ernie, and especially Grover, who–as a result of Elmo’s coup de cutest–has retreated into an even more deluded version of his Super Grover alter-ego, trying way too hard to make himself relevant by unnecessarily upgrading his superhero uniform to “2.0” status and constantly asserting himself as “cute” in a futile, passive-aggressive attempt to dethrone Elmo’s natural, organic cuteness. John will even admit to agreeing with the Anti-Elmo League for a while, but now that John is a Loyal Viewer, John gets it.

Elmo is a natural born entertainer. Eternal optimism, a curious thirst for life, and genuine care for one’s fellow monster make Elmo hard NOT to love–so much so that people are even willing to overlook Elmo speaking exclusively in the third person and avoiding pronouns except the occasional “he” when talking about Elmoself, in order to avoid a rapid-fire, five-“Elmo” sentence. (Did Elmo notice John is doing the same thing in this letter? John wonders if John can get away with it.)

In fact, Elmo is so captivating that John DVRs Sesame Street every day because John often finds the one way John and John’s wife can afford 15 minutes to eat dinner without shrieking banshee interruptions is by putting on “Elmo’s World” for John’s loinfruits. John realizes the “World” is really intended for older viewers, but John’s Twins just adore Elmo and always kick their little feet when they hear the “Elmo’s World Theme Song.”

Which brings John to the reason for this letter.

See, Elmo, John is sure you realize how unbelievably catchy the song is. It was a runaway success in its first incarnation as “Elmo’s Song,” and as “Elmo’s World” has become arguably the Street’s most popular segment, the ditty has become engrained–tattooed even–in the consciousness of parents and children everywhere. John wonders if–when Elmo was writing the song–he acquired government funding for a team of musically-inclined scientists to discover the most irresistibly infectious permutation of notes possible, or maybe had Paul McCartney or Neil Diamond ghost-write it, or even is hiding a resurrected John Lennon somewhere on the set (Oscar’s can?).

John thinks Elmo should get on the phone with Elmo’s agent and make that happen.

Anyway, Elmo, John’s point is the song is addictive. While home with the Twins, John finds himself involuntarily and spontaneously belting out “Elmo’s Song” as if under a spell, and even writing and performing John’s own off-the-cuff verses.

But that’s not even John’s real complaint.

Elmo, John has issue with the lyrics.

John thinks it will help if John breaks it down.

Okay, now this makes sense. Not only does this hearken back to the old, classic origin of the song; non-word, sung syllables have proven to be an excellent avenue to a solid hook, as they are easy to remember and facilitate sing-alongs. Look at the beginning of J. Geils Band’s “Centerfold” and the climactic end of The Beatles’ “Hey Jude.” With this in mind, John is already singing along with Elmo after a single “La.” 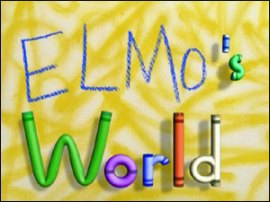 According to Elmo’s argument, the first phenomenon to expect in “Elmo’s World” is the love of a pet goldfish. Elmo still has John’s attention here, because this lyric also fits. It is no secret that Elmo loves Dorothy, and rightly so. John is not a big fish guy, but would convert if John had a goldfish who could generate aquarium sculptures with her fish-mind powers, too.

Where did Elmo get Dorothy? Does Dorothy have any relatives that John could adopt? Now, John could point out the rare use of a pronoun in this line, but that’s not a big deal. It would disrupt the fluidity, anyway.

There it is, Elmo–the problematic line, the one that keeps John up at night, wondering WHY? It’s definitely apparent that Elmo is a crayon enthusiast. In fact, Elmo’s entire house seems to be constructed from them. But Elmo, John never sees you actually use the crayon. John assumes that possibly, at some point, the crayon was used more frequently, but seldom does Elmo incorporate the crayon into “Elmo’s World” nowadays.

Elmo has already said that Elmo loves his goldfish–why not issue a shout-out to other entities in “Elmo’s World” who help Elmo every day? What about Mr. Noodle, his brother Mr. Noodle, and his sister Ms. Noodle, who realize they are not very bright, but still, every episode, try to answer Elmo’s questions, only to be met with ridicule from voice-over children?

He may not have much going on in his noodle, but he's a great sport.

What about “Drawer” who always helps Elmo learn more about what Elmo is thinking about? (Maybe Drawer keeps knocking Elmo over because Drawer is indignant.)

Because it’s a theme song, Elmo only has a short amount of time to encapsulate “Elmo’s World,” and the crayon simply isn’t part of it.

Then, Elmo, the song just ends.

No, Elmo, it isn’t. That’s not “Elmo’s World.” Elmo implies that Elmo has summarized the World, but Elmo has only scratched the surface and wasted limited song real estate on a nonessential element.

John hopes this doesn’t upset Elmo, but John just can’t wrap John’s head around it, and because John still busts the song around the house as if in a musical, John is faced with this dilemma every time John sings about that darn crayon.

Please, Elmo. Don’t leave John hanging like this. Why is that line in Elmo’s song?

John has a feeling Elmo understands and thanks Elmo for hearing John out. John looks forward to Elmo’s response.

If not, John is still so happy to see you!