Someone Who Shall Remain Nameless: So are you still being Mr. Mom?

Me: You know, the term “Dad” works just fine. 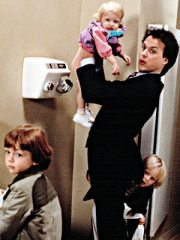 Sure, I could have just let it go. I could have replied, “Yes, I am still being Mr. Mom.” thus avoiding the awkward pause that ensued. Don’t take it personally, I used to tell myself. It’s just a (tired, lame, unfunny) joke. But this terminology is pinned on me often and I have recently decided I am done with just letting it go.

It’s not that I feel emasculated wrangling the Twins all week. I challenge any “man’s man” who thinks stay-at-home parenting is for sissies to actually try it for one day. (In fact, I imagine it could make for a thoroughly entertaining reality show, with each episode culminating in a grown man sobbing.) It’s definitely not easy, but at the same time it’s also the most rewarding thing I’ve ever done. Many fathers would jump at the opportunity to spend as much time with their children as I do, especially at this age. I blinked when they were eight months old and was suddenly thrown into a DeLorean which promptly accelerated to 88 miles per hour, traversing space and time to today, as I open my eyes and find them eleven months old. Until I can get the Flux Capacitor to flux again, I make an effort each day to take it all in (and document it in HD) because I know how fleeting babyhood is.

END_OF_DOCUMENT_TOKEN_TO_BE_REPLACED

Today we officially venture into the uncharted waters of stay-at-home-dad-ness.

Having ensured the vessel to be seaworthy for months, today we officially ventured into the uncharted waters of stay-at-home-dad-ness, or, if you will, The Voyage of the Water Treader.  The School Year That Refused To End finally gave in after a heated thumb-wrestling match, and after the long Memorial Day Weekend, the Winds of Change solemnly whispered that today would be my first day reporting for duty as the new Captwin, while Her Royal Momness, who is commissioning this expedition, returned to work full-time.  Just before setting sail, we gathered on the poop deck to bid her adieu, standing at attention in a line for her inspection.  The affair was promptly interrupted by the necessity to swab said poop deck, for my son was commemorating the occasion with his own diaper-made fireworks.

Finally, it was time to say our goodbyes.  “The hour has arrived,” I murmured to my two First Mates, their faces gleefully jubilant.  Oh, to be so young and oblivious again, I thought.  Have they any idea what’s to come?  But let’s face it, neither do I.

Her Momness surveyed the craft one last time, glanced at the amber horizon, and drew in a deep breath.  I shushed the crew.  “Quiet, lads!  Her Majesty wishes to speak!” I just knew she was preparing to impart a gilded nugget of wisdom, gained from four turbulent months at sea with this very crew.

She raised an eyebrow.  “Lads?”

“Sorry.  What were you gonna say?”

“I turned on the Crock-Pot, so dinner should be ready by the time I get back.”

I grinned, now detecting the faint essence of spice in the salty sea air, which could only mean one thing—when we returned to port that evening, we would not have to settle for hardtack, but would instead feast on the glory that is Pulled Pork Night.

Just minutes ago, in the privacy of the Captwin’s Quarters, I had briefed my crew—both Twinfants and our canine defender/mascot—to look as mind-numbingly cute as possible, and as our Matriarch bade us each a farewell kiss (I think I got a little tongue…Yes, I’m quite certain), the children did me proud, cooing and smiling from ear to ear.  Unfortunately, our canine kind of dropped the proverbial ball, promptly falling asleep under the ship’s wheel soon after inspection.

Her Momjesty stepped off port-side onto the pier, but lingered, taking in a final gaze.  I waved dorkily.  “We’ll be fine,” I assured her.

Eventually, after promising to document every millisecond of our journey in HD for her review and insisting we would be ready for a Skype or FaceTime call at the drop of a teething ring, we were off.

Rough waters rocked the craft in the early morning, triggering even rougher waters to emanate from my son’s mouth, necessitating a record three wardrobe changes on the day, but he wore it well, mirthfully logging hours on ship apparatus including the Jumping Station and a Wellness Inner Tube (known more commonly to lubbers as an Exersaucer).  A chipper lad, that one.

Sometime around noon, one of my crew actually made some waves of her own.  I did not expect this so early in our journey, but my spirited female First Mate seemed to be flirting with mutinous thoughts.  She would not heed the Crew Naptime Schedule (CNS) as posted.  (I never verbalized this, but suspected her loyalty was only to Her Momness, and not to this cheap imitation with no milk-bearing knockers.)  Our debate over the issue was heated and even escalated to such a commotion on the main deck that her shipmate was awoken several times in his own quarters—the racket slicing like a cutlass through even the white noise of a stand-up fan and our (Miami?) Sound Machine.  It seems that as of late, during daytime hours, she prefers to be vigilant for all that life has to offer rather than whiling daylight away unconsciously, something she and I actually have in common.  Having realized this, we ultimately resolved the matter when she agreed to adhere to the CNS from our ship’s mechanical, swinging Crow’s Nest.  That way, she would be able to keep watch at her leisure while the gentle rocking motion of the waves and the soothing calls of the plush electronic seagulls flying overhead assisted her into slumber.

As trying as the day was, I did manage to steer the ship clear of the alluring siren song of social networking, a feat of which I am particularly prideful.

Some hours later, emotions ran high as the entire crew was faced with braving our greatest challenge yet—the drab, five-note-only, on-hold music of the customer service line for our broken baby monitor, the malfunction of which has absolutely nothing to do with the sexual advances on my wife it has transmitted in weeks prior.

Having collected the day’s findings, we retired back to port with mouths agape and watering for the tender, tangy goodness that is pulled pork (or possibly from teething—hard to say).  Upon arrival, we were reunited with Her Momness, who promptly asked me if I was still man enough to be Captwin.

I answered with a resounding “Aye!” and at that, a disguised band of nomadic minstrels flash-mobbed into stirring rendition of Men Without Hats’ “The Safety Dance” as the Festival of Pulled Pork Night began.

Which brings me to where I am now, recounting the day’s events before retiring to the Captwin’s Quarters, but tomorrow the voyage continues. All things considered, it was a successful first outing. We know not what lies before us in these waters, but in attempting to speculate what is to come, one must concede that only time will tell.